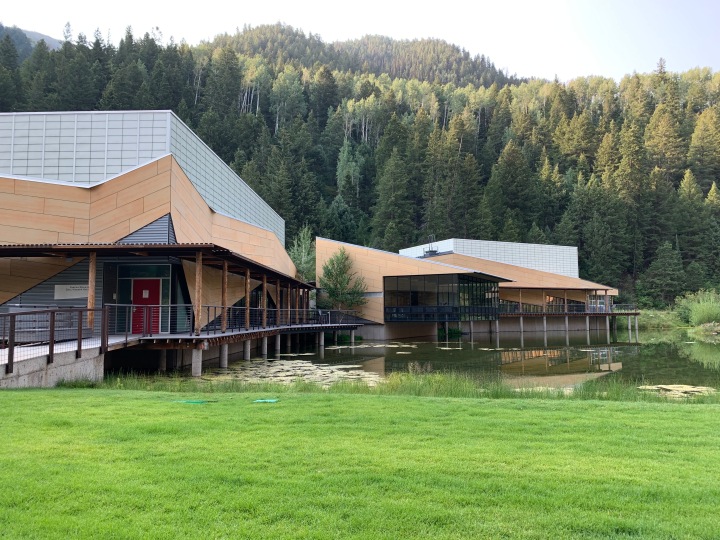 As Joni Mitchell so aptly put it in her 1970 song “Big Yellow Taxi,” you don’t know what you’ve got ’til it’s gone. If the pandemic (and the year 2020 in general) taught us anything, it’s that very lesson. Though the year was abysmal for numerous reasons, for many people—myself included—the gradual cancelation and ultimate absence of live music was one of the more disappointing casualties of that raging dumpster fire. As the months dragged by, I couldn’t wait to sit in a darkened concert hall once again and even surmised what the experience might look like in a post-COVID world.

Although we’re not in a post-COVID world quite yet, live music has once again become a reality. (At least, for now… PLEASE get vaccinated, people!!!) Because of this, I recently had the opportunity to spend a third summer working as the Assistant Program Book Editor at the Aspen Music Festival and School. While program book and various other work responsibilities took up a sizable portion of time—i.e., lots of proofreading—I was still able to attend several concerts during the Festival’s eight-week season. This was, in a word, wonderful. After spending well over a year getting my music fix from live streams and Spotify, it was so, so refreshing to hear in-person concerts again (and in the gorgeous mountaintop setting of Aspen at that). Though concert protocols looked a bit different than normal years—mask-wearing, distanced seating, etc.—it was nonetheless a memorable summer filled with some incredible performances.

I’ve always wanted to do some sort of post-season wrap-up of my summers at the Festival, but the looming responsibilities of grad school always (rudely) got in the way. Well, since I’m now solely writing my dissertation—not that this isn’t a looming responsibility in itself!—and don’t have to worry about classes, I thought this would be the perfect year to compile some thoughts on Aspen’s 2021 season. That said, here are a few of my favorite concerts and performance highlights from the summer:

While the music of Felix Mendelssohn is justly celebrated, it has too often eclipsed the output of his just-as-talented sister, Fanny Mendelssohn Hensel. This is slowly starting to change, though, as musicians begin to grant Hensel a rightful place in the spotlight. One such case occurred at a recital presented this summer by the Pacifica Quartet. Alongside quartets by Florence Price and Sergei Prokofiev (both marvelous works), the program featured Hensel’s sole String Quartet in E-flat. I only became aware of Hensel’s output several years ago, but this piece eluded my radar for some reason. Hearing it for the first time at this concert was a delicious surprise—it’s a brilliant work packed with craft, lush beauty, and charming wit. My favorite moment: in the second movement, Hensel throws in a short fugato as if to say to her nineteenth-century haters, “Oh, so you think women composers can’t write counterpoint? Well, how does it feel to be wrong?” (There’s also a fiendishly difficult cello part in this movement that actually made me chuckle out loud.) A truly wonderful discovery.

To be perfectly honest: there was a bit too much Beethoven on Aspen’s season (for my taste, at least) and some of the all-Beethoven programs got kind of tiresome after a while. However, after over a year devoid of live music, it was great to hear it—or anything, for that matter—again and there were some really touching moments throughout the Festival, including an admirable, season-opening performance of the Ninth Symphony. A personal highlight, though, was a performance of his Fourth Symphony by the Aspen Chamber Symphony and conductor Gemma New. Even though this is one of my favorite symphonies of his (numbers 3 and 7 are also up there), I had forgotten just how delightful of a piece it is. It’s everything you want in a Beethoven symphony, without the existential angst of some of the later works—lovely melodies, surprising turns of phrase, and a cheeky “fake-out” ending in the finale. OK, Ludwig, you got me.

I’m a sucker for mixed programs that pair new and/or less-often-heard works with familiar favorites. This concert (performed by the Aspen Chamber Symphony and conducted by Benjamin Manis) scratched that itch perfectly. The program was as follows:

Hearing these works together created some wonderful programmatic and aural connections—especially between the Barber and Ravel—and I left feeling completely happy and satisfied. This concert also highlighted one of my hands-down favorite performances of the entire summer…

Samuel Barber’s Knoxville: Summer of 1915 is a marvelous piece on its own, but to hear it on a warm summer evening in an open-sided performance venue was really something else. The South African soprano Golda Schultz sang the solo part with exceptional grace (and impeccable clarity/diction) as the Chamber Symphony provided nuanced accompaniment. But the best moment of the performance occurred about three-quarters of the way through. As soon as Schultz sang the lines, “The dry and exalted noise of the locusts from all the air at once enchants my eardrums,” a soft breeze picked up and began rustling the Aspen trees outside the Benedict Music Tent. Pure magic.

At its core, Aspen is a teaching institution that plays host each summer to some of the world’s most talented young musicians. There were many incredible student performances throughout the season, but two—both with the Aspen Conducting Academy (ACA) Orchestra—stood out in particular.

The first was a blazing performance of Shostakovich’s First Piano Concerto. Student Linzi Pan, winner of the summer’s ACA Piano Competition, played the solo part with stunning power and intensity—I honestly would not have been surprised if the piano caught fire during the performance—and another student, Kenneth Chauby, deserves a special shoutout for skillfully navigating the Concerto’s tricky obligato trumpet part.

Speaking of things that are tricky, student violinist Brian Allen presented one of the cleanest and most remarkable performances of Berg’s Violin Concerto I have experienced, either live or in recording. The solo lines—which can so often get messy and lost in the dense orchestration—were totally crisp and clear, bringing out the pristine beauty of Berg’s soul-wrenching music. If this performance didn’t convince the Aspen audience that Berg is not just one of “those darn twelve-tone composers,” well… then I honestly don’t know what to tell them.

The first half of Julia Bullock‘s recital highlighted an extraordinary array of music—ranging from the Franz Schubert and Hugo Wolf to Kurt Weill and Luciano Berio—but the end of the program was particularly special, when Bullock offered several selections by Billie Holiday, Lovie Austin, and Billy Taylor. The most striking of these was an arrangement of Nina Simone’s 1966 song “Four Women.” Featuring a role for prepared piano (sensitively played by John Arida), Bullock presented the song as a detached reflection, with an unnerving sense of composure that made it seem like the bluntness of Simone’s lyrics could explode at any second. In the rapt silence that followed the song, all I could think was: “WOW.”

OK, I may be slightly biased since I wrote the program note for this concert (tee hee), but this truly was an astounding performance. Frederic Rzweski’s 1975 piano work The People United Will Never Be Defeated! is a set of 36 variations on the Chilean socialist song of the same name. It’s also quite the marathon for performers and listeners—the whole piece lasts a little over an hour in length, rarely letting up along the way. Pianist Conrad Tao tackled this extraordinary challenge head-on, whisking us along on the journey with unbelievable stamina and virtuosity. (His improvised cadenza at the end of the work was a specific highlight.) Rzewski himself had passed away only ten days prior to this concert, which made the performance all the more poignant and powerful.

This speaks for itself. Hearing Pyotr Ilyich Tchaikovsky’s Nutcracker Suite in the middle of the summer—with Vasily Petrenko conducting the Aspen Festival Orchestra—was just pure, unabashed fun from beginning to end.