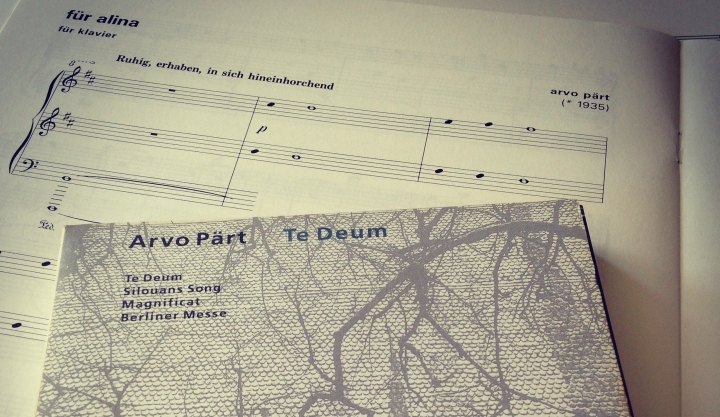 Let’s face it, amidst our technology-saturated, go-getter culture, silence can be difficult to come by. We’re almost constantly surrounded by sound, whether it be from our devices, conversation with others, or ambient noise from our everyday activities. Silence, while sometimes sought out for a means of escape or reflection, is becoming an increasingly rare phenomenon.

In classical music though, silence can be a powerful tool. Say what you will about contemporary concert hall etiquette, but when an audience quietly respect the breaks between the movements of a symphony, it can be a wondrous moment. For composers too, silence can be a great asset. In an article entitled “Forerunners of Modern Music,” the American composer John Cage observed that, “The material of music is sound and silence. Integrating these is composing.” (Cage is perhaps most famous – or infamous – for his 1952 piece 4’33”).

One figure who makes an especially profound use of this idea is the Estonian composer Arvo Pärt. In addition to utilizing simple tonalities and sparse textures, many of his pieces make ample use of silence, which is often meticulously composed into the score. Together, these features give Pärt’s music a strikingly original and contemplative quality, which has left a lasting impression on contemporary classical music.

Pärt was born in 1935 and raised in Soviet-controlled Estonia. (His last name is pronounced “pear-t.”) He began writing music under strict censorship laws but like many of his fellow Eastern European composers, he soon became fascinated by the new musical innovations happening elsewhere in Europe and the United States. Some of his compositions started to incorporate elements of serialism and avant-garde experimentation, much to the disapproval of government officials. In 1968, his choral/orchestral work Credo was formally banned. Despite an enthusiastic reception from the audience, officials saw the religious Latin text as a provocation. (As far as the music itself goes, the middle section is extremely dark and dissonant, but the rest of the work is largely tonal. In fact, the outer sections use Bach’s famous Prelude in C Major from The Well-Tempered Clavier as the melodic/harmonic framework. That’s about as tonal as you can get!)

Soon after the work’s rejection, Pärt entered a prolonged period of creative silence. He  studied early music, finding inspiration in Gregorian chant and medieval polyphony. He also converted from the Lutheran faith of his upbringing and joined the Russian Orthodox church. A number of years later, in the 1970s, he returned to the music scene with a completely new compositional style called “tintinnabuli.” Named after the Latin word for the ringing of bells, Pärt’s technique reduces the musical texture to two main elements: a “melodic” voice which moves up and down (mostly by step), and a “tintinnabuli” voice which surrounds the melodic content with notes from the tonic triad. This, in effect, creates music that is pure, uncluttered, and hauntingly beautiful. (You can read a more in-depth explanation about his process here.)

One of the first works to showcase Pärt’s “tintinnabuli” technique was his short piano piece Fur Alina, and he started employing it in other works as well, both instrumental and choral. In the 1980s, soon after debuting his new compositional voice, Pärt immigrated to Vienna with his family. (Today, he lives in both Berlin and Tallinn.) Many of his pieces began to be recorded by the German jazz music label ECM and before too long, his music had become widespread all over the world. (The sound quality in these recordings is phenomenal – I highly recommend them!) Because of his deep spirituality, sensitivity towards text setting, and love for silence, he was (and often still is) dubbed a “holy minimalist” and compared favorably alongside other twentieth-century composers such as Henryk Górecki and John Tavener.

I first encountered Pärt’s music during my freshman year of college and was immediately hooked. It’s impossible to accurately put into words what is so alluring about his music and what keeps me returning to it. Perhaps it’s the ethereal tonalities he can conjure with human voices or seemingly familiar combinations of instruments. Perhaps it’s his love for setting religious texts, which have the power to give one just a fleeting glimpse of the divine.

Or perhaps it’s the quiet humility and authenticity that he exudes as a person. In an immense stroke of luck, I was actually able to meet Pärt at Disney Hall back in 2016. (The LA Philharmonic was presenting a series of concerts which uniquely placed Pärt’s music alongside works of Mozart.) He was a soft-spoken, but kind man who graciously took the time to greet concertgoers after the performance. Even though his English skills are limited (he’s apparently fluent in Estonian and German), through the help of his translator, I was able to share with him the enormous blessing that his music has been in my life. (“Composer?,” he asked me as I handed him a score to sign. “No, musicologist,” I responded. He seemed impressed!) It was truly an honor to meet this living legend and one of my personal musical heroes.

One of the trickiest questions I’ve had to answer is: which work of Pärt’s is your favorite? (Second only to: who is your favorite composer?) Honestly, it seems like I have a different response each time. Pärt’s music is so visceral and fluid, that one piece of his may speak to me one day while a different one may inspire me on another day. It really depends on where I’m at in life – mentally, emotionally, and spiritually.

Because of this, it was quite a challenge to select which of Pärt’s works I should conclude this post with. After much thought and self-doubt, I finally settled on three pieces that I think provide a nice overview of his range as a composer. (I have also added a few more into the Spotify playlist at the bottom of the page for those who want a starting point for further listening.)

Hopefully, this music will provide a brief, yet welcome respite from the craziness of our current world. For those uninitiated to Pärt’s music, here’s a gentle suggestion: while most of his output is pleasing to the ears, his music is often soft, repetitive, and slow-moving, with frequent space given for silence (as mentioned above). I was fortunate enough to “get” most of Pärt’s music upon my first listen but if you are finding it difficult, have patience and be persistent. Some of his pieces can reap great rewards after multiple listenings. (In fact, I am still learning to fully appreciate his Passio, a seventy minute setting of Jesus’ passion from the book of Luke. Whenever I revisit it though, I find that I enjoy it even more than the previous time.)

So, find some time to sit back, relax, and enjoy both the sound and the silence in Pärt’s music. For, as Pärt himself once said, “Silence is the pause in me when I am near to God.”

This sublime setting of the Roman Catholic Mass was originally composed for four vocal soloists (soprano, alto, tenor, bass) and organ until Pärt revised it for full chorus and string orchestra in 1997. While the original, pared-down scoring reveals the intricacies of Pärt’s “tintinnabuli” style, the chorus/string orchestra version of Berliner Messe (“Berlin Mass”) is a rich feast for the ears. In either setting though, the work wonderfully reflects the nature of its Latin text, ranging from soft piety to joyous bursts of sound. The beautifully reverent “Sanctus” movement is posted below – the entire work can be heard in the Spotify playlist at the bottom of the page. (The first movement, Kyrie, was actually featured in Avengers: Age of Ultron during the climactic battle scene. *SPOILER ALERT for the preceding link, if you’ve never seen the film!*)

Fratres, which means “brothers” in Latin, was originally composed in 1977 for string quintet and wind quintet. Pärt has since re-worked the piece for a number of other instrumental combinations. (The setting for cello and piano was featured to stunning effect in the 2007 film There Will Be Blood). Perhaps the most well-known arrangement is the version for violin and piano, arranged in 1980 for Gidon Kremer and his then-second wife, Elena.

This work is a prime example of Pärt’s “tintinnabuli” style. After a brilliant fantasy for solo violin, the piano plays a series of slow, bell-like chords, which form the harmonic structure for the entire piece. The violinist then begins a series of variations on a long, winding melody as the piano continues to cycle through the original chords.

Arguably, where Pärt shines the most is in his music for unaccompanied human voices. When performed just right, with proper balance and limited use of vibrato, the harmonies can “shimmer” and create a gorgeously pure sound world.

Which was the son of… showcases a more playful side of Pärt. The work sets the genealogy of Jesus from the book of Luke and has some fun with what’s normally considered a pretty banal text. Pärt jumps between different styles throughout the piece, giving the names in the genealogy a vibrant mix of colors. This leads to the most important name of all – God – before cadencing on a final, assertive “Amen.”

One thought on “Beauty in Silence: The Music of Arvo Pärt”

© 2017-21, Kevin McBrien. Unauthorized use and/or duplication of this material without express and written permission from this site’s author and/or owner is strictly prohibited. Excerpts and links may be used, provided that full and clear credit is given to Kevin McBrien with appropriate and specific direction to the original content.